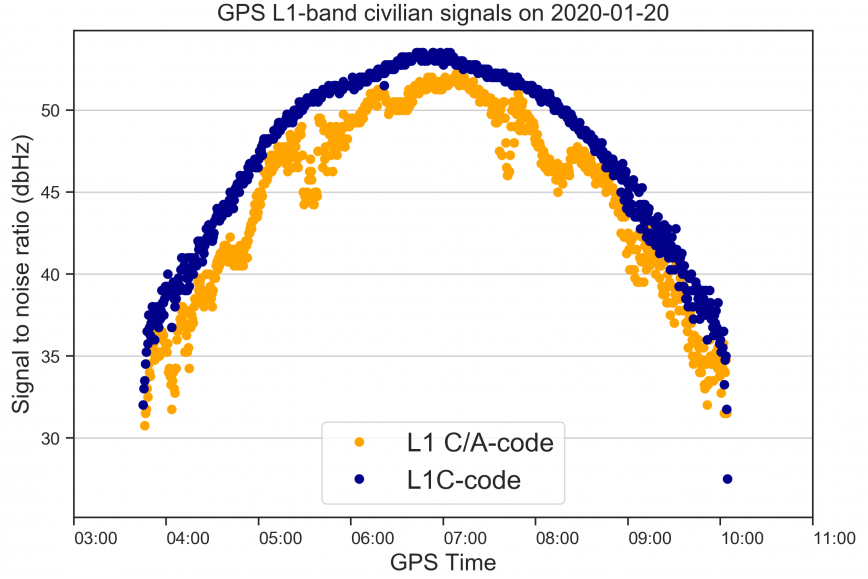 The new signal (L1C, marked with blue) is 3-5 dBHz stronger and more robust than the legacy L1 C/A signal (marked with orange).

‘Marking a satellite healthy, it means receivers can use this satellite in their positioning, navigation and timing applications. L1C is the 4th GPS signal for the civilian use,’ says Dr. Octavian Andrei, senior research scientist at the Finnish Geospatial Research Institute (FGI).

The other three civilian signals of GPS are L2C, L5 and L1 C/A.

LC1 is interoperable with the European GNSS signal

L1C signal is transmitted on L1-band at 1575.42 MHz. It is meant to replace the legacy C/A signal in the future. L1C allows for the first time GPS compatibility and full interoperability with signals from other satellite systems, such as E1 signal from the European Galileo.

The interoperability with Galileo is further enhanced by transmission of the inter-system timing biases i.e., GPS-Galileo Time Offset. All these improvements will bring further benefits and developments to the GNSS market and civilian users in general.

Ionosphere is not a problem with dual-frequency

‘Exciting times ahead for the civilian users and applications that demand precise satellite positioning and navigation. Most of the effects due to the ionosphere layers of the atmosphere are removed by combining signals from two frequency bands sufficiently apart from each other. This is the case with L1 and L2 or L1 and L5. All these civilian signals are stronger and more robust than ever before,’ explains Dr. Andrei

The satellite signals are affected by errors while travelling through the atmosphere. The main errors are due to the ionosphere that is a dispersive medium and frequency dependent. The latter proves to be actually a significant benefit for the precise applications.
More than 99 % of the ionosphere effect is removed by forming special linear combination of signals observed on two different frequencies. This is the main reason why high-precision is achieved with dual-frequency receivers.

‘Two GPS III satellites have been launched until now and two more are expected to be launched during 2020. With signals from four satellites, we will also be able to estimate L1C-only positions,’ says Dr. Andrei.