Dangerous space debris to be removed with laser

Earth’s orbit is becoming crowded with satellites and space debris from collisions. New collisions pose a significant threat to vital satellites and space stations. Telecommunications, navigation, weather forecasts and many security related functions all depend on satellites. In a new international project, a satellite is being developed that could push dangerous debris away from important orbits. 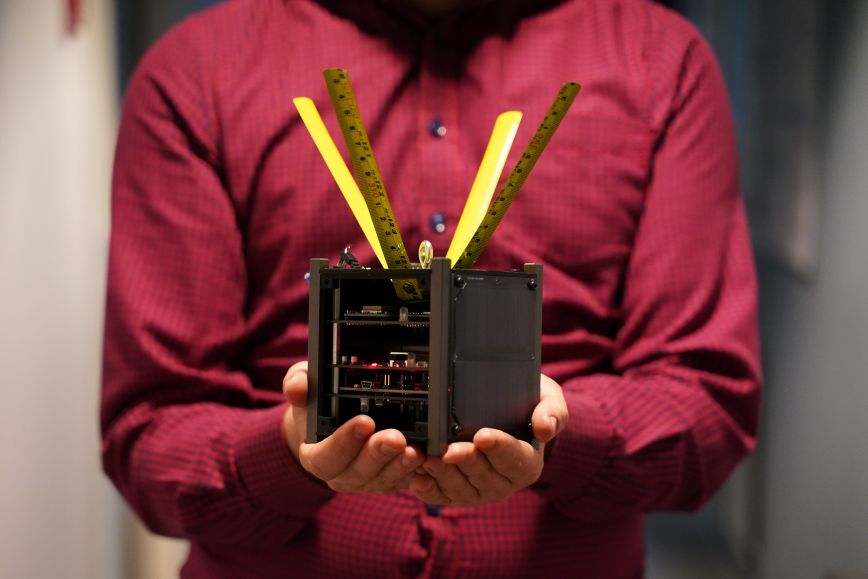 KitSat training satellite. It is used for researching the physical qualities of a satellite.
Photo:
National Land Survey

The new satellite would push small pieces of space debris with laser pulses. The research project focuses on de-orbiting or re-orbiting objects less than 10 centimetres in length. Small objects less than 10 centimetres in size cannot be monitored from Earth, and other methods being developed for controlling space debris, such as chaser satellites and ground-based high-power laser pulses, are not suitable for removing them.

Dangerous debris must be removed

‘Even small fragments of space debris are dangerous, as they move faster than a bullet. The smallest piece can punch a hole in a space station’s wall or destroy a whole satellite’, says research manager Jouni Peltoniemi from the Finnish Geospatial Research Institute (FGI).

Right now, the only way to avoid collision with large pieces of space debris to adjust orbits. The largest objects can be monitored from Earth, and orbits and manoeuvres of satellites can be planned to avoid collisions.

‘The sun, Earth’s atmosphere, solar particle storms and other factors cause uncertainty in satellites’ orbits, which means we cannot always plan ahead. Changing orbits is risky and consumes fuel. Orbital manoeuvres shorten a satellite’s service life, as its fuel reserves are depleted faster’, Peltoniemi explains.

Peltoniemi is responsible for Finland’s share of the Olamot project that conducts research in the safe removal of space debris under 10 centimetres in size. The project is led by Thales-Alenia-Space (TAS), a French-Italian space industry company, that will implement the project in cooperation with the National Land Survey’s Finnish Geospatial Research Institute.

‘We already know that the radiation from the Sun and, on a smaller scale, the Earth has an effect on the orbits of satellites and space debris. The effect can be hundreds of metres per orbital period. With a moderately efficient laser, we could cause a change of several kilometres to an object’s orbital parameters. This would be enough to move the object away from the orbits of important satellites’, says Peltoniemi.

Giving the pieces of debris just the right amount of push requires precise timing, intensity, aim and polarisation. The wrong amount of force can burn the object prematurely, push it to an even more destructive orbit or it might do nothing at all. The force is mainly exerted in the direction of the laser beam, but asymmetrical surfaces, the spin of the targeted objects and the shape of the laser beam, for example, make aiming precisely more difficult.

The challenge lies in the fact that the pieces of debris cannot be monitored from Earth, and their composition, shape and spin cannot be measured in advance.

‘We can only use statistic models to estimate the size of the object, and then adjust the laser on the fly to suit it. We might not have much time to react from the time we first observe the object’, says Peltoniemi.

The method requires taking the new satellite into the debris field, where an accuracy of hundreds of kilometres can be achieved for observations and aiming the laser. Before shooting an object with a laser pulse, its orbit must be found out as well as whether it poses a threat to a satellite. Next, quick decisions on whether the object’s orbit needs to be changed–and into what direction–need to be made. The last phase is monitoring whether the object’s orbit really changed or if the operation caused unexpected results. When the target’s exact location is determined, it can be monitored from Earth for a short time with telescopes, radars and lasers, but if an object is lost, it can rarely be found again.

The Orbital laser momentum transfer project (Olamot) is carried out under a programme of, and funded by, the European Space Agency ESA. The views and opinions expressed in this press release are those of the people stating them and do not necessarily represent ESA’s official position.