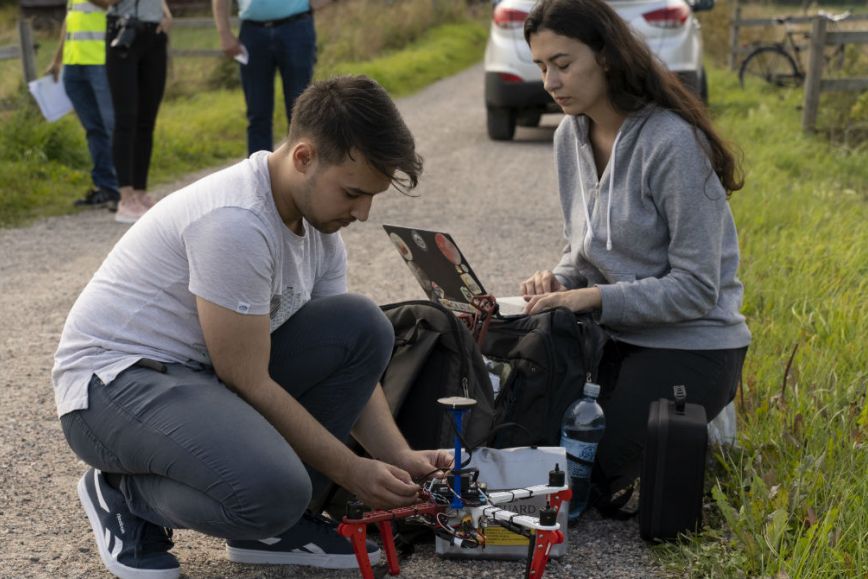 The use of remotely controlled aircraft, UAV or drones, in various sectors of industry and business, as well as in support of social activities, is steadily growing. The Drone Tournament event, organised by Ultrahack, brought together some of the biggest names in the drone industry in Finland.

The DroneFinland research group has been engaged in drone research at the National Land Survey of Finland for more than ten years. Members of the group acted as judges in the challenges hosted by the NLS in the Drone Tournament. The challenges were designed to test the technology of the participating drones and to help find innovative solutions to problems in environmental protection and building maintenance, for example.

In the Building Care challenge, hosted by the City of Espoo and the NLS, participants used their drones to map out the maintenance needs of buildings. The teams were tasked with inspecting the rooftop of Tapiola Upper Secondary School. They were also asked to produce a report that detailed all their findings.

The participants came up with a variety of approaches to the task. In the most cost-effective methods, one person evaluated the condition of the rooftop and identified all the central maintenance needs after the drone survey was conducted. The fastest method involved a drone that relayed real-time survey data to a control centre located in the back of a van, and a person on a Mini Segway who followed the drone through the terrain.

Teams from all over Finland arrived to compete, some from as far away as Oulu and Pudasjärvi. In the end, team HOLTANsähkö was chosen as the winner of the challenge.

The winning team conducted the survey efficiently, provided excellent image and video quality, and identified all the central locations on the rooftop in need of repair or closer inspection. The winners also used propeller guards for increased safety.

“The competitors proved that drones are already a cost-effective and safe alternative for roof condition assessment. I believe drones will be used increasingly, and that they will be an integral part of the concept of a “smart city”. They serve as a good basis for energy efficiency, smoother traffic flow, safety and generally for building healthy and functional urban and natural environments. The crown jewels of DroneFinland’s research – sensors and smart analytics – will play a central role in this process,” says Research Manager Eija Honkavaara from the Finnish Geospatial Research Institute of the NLS.

Drones – the future of farming

The teams taking on the Count the Grass challenge were asked to estimate the total biomass of grass in a field of a few hectares in kilos. They were also tasked with making a map of the area that showed the variation in the density of the biomass in different parts of the field.

“We saw some very interesting approaches in this challenge. There were cameras so small you could barely see them, as well as the more traditional kind, and one team had even built a precision spraying demo into their easily affordable drone,” says one of the judges, researcher Roope Näsi from the Geospatial Research Institute.

The Count the Grass challenge was held on Monday 2 September at the University of Helsinki’s research farm in Viikki. Team Avoin Field’s performance was deemed the most impressive.

“In this challenge, we looked at the performance of the teams as a whole. The winners produced the most useful set of data from a farmer’s point of view, and they did it quickly and efficiently,” says Jere Kaivosoja from Luke.

New technology to assist with the seed production of trees

The second challenge hosted jointly by Luke and NLS was a data processing challenge. In the Flowering Forest challenge, the participants were asked to calculate the flower count of some trees from data collected from a spruce forest used for seed production. They were also asked to assess the condition of individual trees.

“2019 was an excellent year for flowering, and we wanted to know how the flower count varied from tree to tree to plan for harvesting spruce cones and thinning the forest for sapling production. At the same time, we received some valuable information on the genetic makeup of the seed crop,” says researcher Tiina Ylioja from Luke.

The NLS collected the data used for the challenge with a drone in May.

“The competitors received all the images we took, as well as photogrammetric point clouds and ortho images. Luke also gave the teams information on the condition and flower count of a few trees as an example to help determine the same information for all the other trees in the area,” says Näsi.

The teams took full advantage of the ortho images and utilised neural networks. The winner was Team Avoin Forest. The different methods of the teams provided some promising new information that will be utilised in future during the flowering season, both for research purposes and seed production in practice.

The setting for the challenge NLS hosted with the City of Helsinki was an accident on the coast that resulted in some unknown material drifting to shore. In the Hazardous Chemical Problem challenge, the participants were asked to find and locate waste canisters on the shores of Harakka island, detect any possible spillages from the canisters and, as a bonus, retrieve a sample of the unknown liquid floating in the water and deliver it to the judges.

The challenge was held on the Kaivopuisto seafront and near Harakka island on Wednesday 4 September.

“Drones are perfect for quickly forming an overall picture of accidents and mapping out the damage. With the appropriate sensors, we can detect oil spillages, and using AI enables us to detect and identify deviations in different surroundings almost in real time,” says Senior Researcher Lauri Markelin form the Geospatial Research Institute.

The teams came up with a variety of methods for finding and identifying the canisters. The best performance came from a team called The Chemical Brothers. They were well prepared, their conduct during the challenge was very professional, they located nearly all the canisters, and they provided the judges with a very high-quality report immediately after they finished their flight. The team also successfully delivered a water sample of around 1.5 dl to shore, clearing the bonus task as well.

The Drone Expo event served as the grand finale of Drone Tournament 2019. It was held on Thursday 5 September in Töölönlahti Park, and the programme featured flight demos and presentations from the partner organisations.