The new research method produces data that can reduce any inaccuracies in forest models and acquire more reliable information on carbon and water cycles in forests, and on forest growth dynamics. A team of scientists from the Finnish Geospatial Research Institute (FGI) of the National Land Survey of Finland (NLS) has installed the world’s first laser scanning station that continuously measures forests at the Hyytiälä forest station maintained by the University of Helsinki. 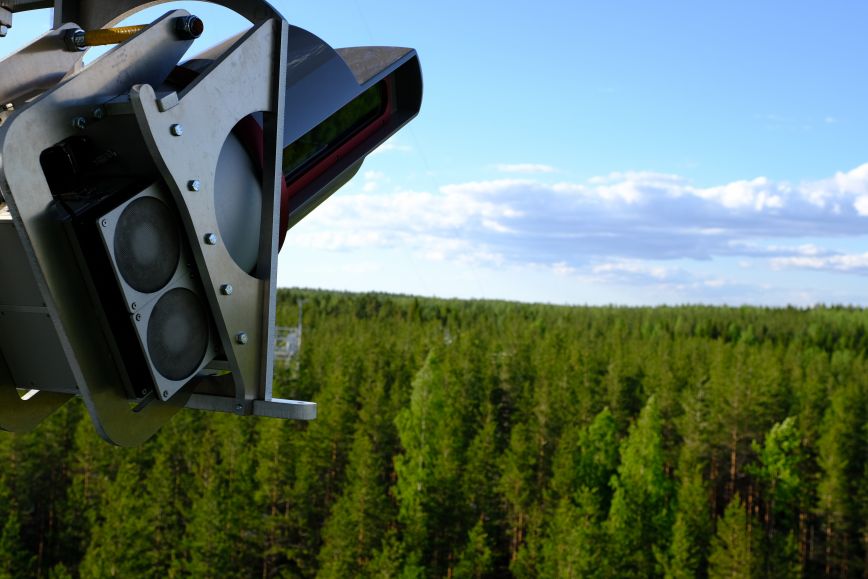 The laser scanning station scans the surrounding forest from a height of 30 metres and collects a continuous point cloud time series in the area. The station monitors short daily trends and longer trends that cover the entire growth period. Thus, it detects structural and phenological dynamics in the forest.

‘Our laser scanning station operates on a completely new scale in terms of the measurement intervals and overall duration. We can distinguish hundreds of individual trees from the area being measured, and then measure accurate data on the shape and structure of trees throughout year. During the growth period every hour and less frequently outside the growth period,’ says research manager Eetu Puttonen.

A highly accurate 3D overview of the forest

Every measured point cloud records the current structure of the forest area as a digital overview with a resolution of one centimetre even 100 metres away from the scanner. The resolution is so high that the station can record how new leaves and needles sprout and grow in the spring.

Laser scanning is an ideal solution for long-term time series research, because the laser scanner can make measurements round the clock. In practice, this doubles the observation period compared with passive imaging sensors.

‘What is more, our time series data can be linked directly with other geospatial datasets. The tree-specific data collected in our research area can be generalised more broadly to apply to aerial laser scanning data, such as the new dense Laser2020 data of the NLS, collected in similar forests. Accurate long-term reference data helps to reduce any inaccuracies in extensive forest models, as the internal dynamics of the forest become better known,’ Puttonen says.

Researchers beat the challenge in the management of huge datasets

The management of the massive volumes of data produced and various environmental factors have previously limited the establishment of this type of laser scanning station. In the development of this station, these limitations were addressed to produce a stable data collection process.

‘Building and testing the laser scanning station were a huge technical challenge. It took an entire year to automate the collection of the point cloud time series, develop data transfers and data processing, and secure operations. However, now we have an accurate point cloud time series from the beginning of April 2020 consisting of hundreds of laser scans, and we are constantly making it larger and larger,’ says Mariana Campos, main developer of the laser scanning station and senior research scientist at FGI.

The team of scientists has published a peer-reviewed technical article on the laser scanning station in Frontiers in Plant Science.

‘In our study, we show that our laser scanning station can produce new kind of data on the state of forests, as well as dynamics and interactions between trees, and with the environment. We hope that similar stations will also be increasingly built at other research stations as part of their undergoing time series measurements,’ Puttonen says.

A point cloud picture and a photo of Hyytiälä forest by Samuli Junttila and Mariana Campos.