A new Finnish space project will be developing technology that will significantly reduce the cost of space operations. The project will develop smart imagers for satellites as well as more efficient processing of remote sensing data. These enable new commercial and scientific applications. 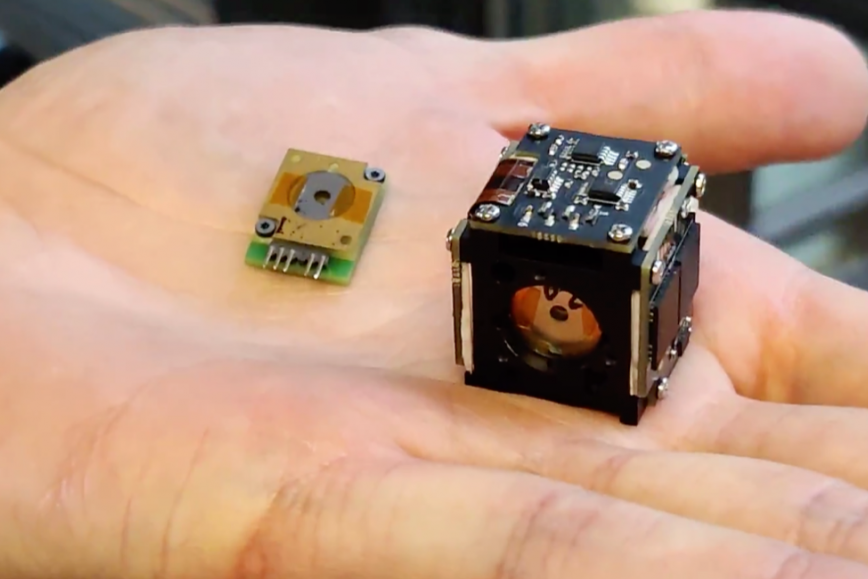 Miniature hyperspectral imagers are so small you could fit a dozen of them on a human palm.
Photo:
Leevi Annala

The ‘Smart hyperspectral imaging solutions for a new era in Earth and planetary observations’ (Smart-HSI) project is developing next-generation miniaturised hyperspectral imagers and smart computational methods that enable the use of autonomous imagers in Earth and planetary observation. Combining the new computational methods, compact hyperspectral sensors and advanced algorithms with CubeSat platforms significantly reduces the cost of space operations. The results will make it possible to carry out observations that are currently unattainable and that will have unparalleled spatial and temporal coverage.

Data is unusable without an efficient data processing pipeline

‘Our goal is to research and develop a remote sensing data processing pipeline for the nanosatellite platform, enabling intelligent and fast satellite data applications. For example, it makes no sense to download every cloud-covered hyperspectral image to a ground station. A smart satellite knows what images are worth sending,’ says Research Professor Eija Honkavaara from FGI.

A satellite could also detect a forest fire, landslide or flood in real time and send information directly to alarm systems.

‘In future satellite systems, satellites could also talk to each other and ask each other to refine their observations, like an area behind a cloud or any object of interest,’ says Eija Honkavaara.

Composition of celestial bodies revealed by their spectrum

Hyperspectral imagers capture the image in a number of separate wavelengths of light, from visible to infrared light. This establishes a spectrum for each individual pixel seen in the image, providing information that can be used to characterise an object’s properties, such as its scope within the image or its composition. In space, such devices can be used in observing Earth or other solar system bodies.

“Finland, especially VTT, has been pioneering the development of compact hyperspectral imaging technology,” explains Docent Tomas Kohout, coordinator and principal investigator of the research consortium from the University of Helsinki.

Hardware and software for nanosatellites through Finnish efforts

The researchers of the new consortium are now developing a new generation of miniaturised hyperspectral imagers and advanced methods for processing the data they collect, with the aim of developing techniques that make Earth and planetary observations increasingly autonomous.

“In this project, we are developing both hardware and software for nanosatellites. The aim is to reduce the costs of new-era space operations,” Kohout adds.

In the three-year project Smart-HSI, the University of Helsinki is focusing on planetary missions, VTT on hyperspectral imaging hardware development, and the Finnish Geospatial Research Institute and the University of Jyväskylä on the optimisation of hyperspectral data processing.
The overall budget for the Smart-HSI project, which will be launched in January 2021, is €1.7 million.