There are no major earthquakes in Finland, but the land is still constantly on the move. Finland moves about two centimetres northeast every year together with Eurasian tectonic plate. Additionally, as a result of the land uplift after the latest ice age, the horizontal coordinates of Finland change a few millimetres and heights up to one centimetre every year. 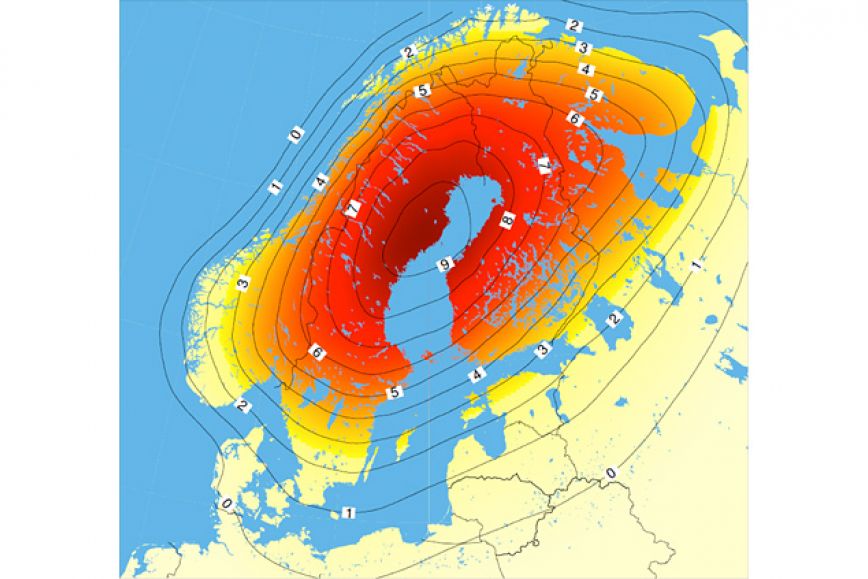 The picture shows the land uplift in Scandinavia. It is fastest in the Quark area, nearly 10 cm per 10 years.

‘That may sound like a small number, but with satellite positioning, for example, the coordinates currently differ about 70 centimetres from the national coordinates, and this difference is growing all the time. It is essential to take this into account in the future intelligent traffic, aviation and navigation, for example. And as the land rises in the Vaasa region by one metre every one hundred years, this also changes the coastline in notable ways,’ says Hannu Koivula, the department head leading the KaRef project at the National Land Survey of Finland.

KaRef project strives to solve the challenge of changing coordinates

KaRef project looks for a solution to the increasing inaccuracies of coordinates and the related reference systems.

The reason for this is that all the current Finnish systems are static; they are based on reference points with unchanging coordinates. However, these reference points are moving slowly in relation to each other and with the Eurasian plate, further away from the point to which they were once set. Due to this, their coordinates no longer match the actual position of the reference point.

This problem could be solved by introducing dynamic systems where the coordinates are constantly changing, which are also used by the satellite positioning systems. This would enable taking the movements of earth's crust into account, maintaining the accuracy of coordinates. However, daily changing coordinates are challenging for geospatial datasets. One option is to use the dynamic and static systems parallel to each other.

A different set of challenges in air and at the sea

As a consequence of the international standards and regulations, aviation and navigation, for example, must apply global coordinate reference systems, which have to be taken into account in Finland. Finnish Transport and Communications Agency Traficom is currently managing a waterway and nautical chart reform, in which the N2000 height system in nautical chart products and in depth data of waterways will be introduced at stages, starting in late 2020. Commissioning the N2000 height system guarantees improved compliance of depth data both nationally and internationally.

‘In future years, our nautical charting and waterway services will be in constant need of development due to the automation and digitalisation of shipping, which means that the demands for exact data and the criteria for acquiring information will increase even further. It’s wonderful to be a part of the KaRef project, as it enables us to give feedback of their work and, on the other hand, teaches us what the reference systems will be used for in the future,’ says team leader Maarit Mikkelsson from Traficom’s hydrographic survey services.

‘Finland has invested a great deal in the national laser scanning programme, and without a geoid model, the point clouds cannot be converted into the national N2000 height system. In the KaRef project, we will also review whether the accuracy of the national geoid model can be improved, so I’m looking forward to the project’s results,’ says director Juha Vilhomaa from the National Land Survey of Finland.