How does land surveying work?

Land surveying began in Finland in the 17th century. The need for surveying has not disappeared over the centuries – we still need to know where roads, fields, forests, plots and properties are located. Surveying tools have evolved and the work has become more automated. Customers have an increased need for up-to-date and fast access to materials. The National Land Survey of Finland has responded by developing its production at a rapid pace. 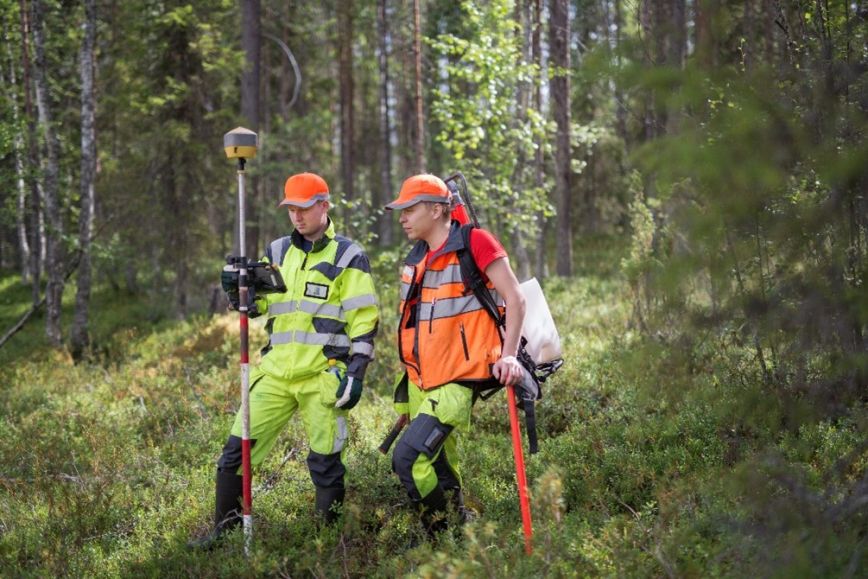 Land is surveyed using positioning technology. Cadastral surveyors go out into the field to parcel plots and check plot boundaries, among other things.
Photo:
Maanmittauslaitos

How a surveyor measures the land

Vesa Romppainen, who works as a surveyor in Oulu, has seen the development of surveying as a professional since the 1970s. An important task of surveyors is updating the topographic database, which is done by Vesa and some 100 colleagues around Finland.

“In this area as in others, information technology has come a long way, enabling larger projects and faster implementation. The best thing about my job is independence and the fact that I can schedule my own work to an extent, depending on matters such as the annual cycle,” says Romppainen.

A stereo workstation is used for the office work. With a stereo workstation, you can view aerial photos in 3D, making the shapes of the terrain more clearly visible. The aerial photo is compared with a previous map to see whether anything new has been built in the area, for example. Unclear cases are marked for surveying in the field.

When they need to go to the terrain, surveyors will take a separate GNSS positioning device with them. It is connected to a terrain tablet computer. The terrain tablet can be used to view aerial photos and a variety of map data. The GNSS device includes a laser rangefinder to help with the surveying work. In addition to technology, you need a keen eye.

“When we survey sites, we look at sites marked with comment flags while observing the landscape, because the aerial photo for the area is from the previous summer. Any changes after taking the photo will only be visible in the field,” says Vesa Romppainen.

Land is surveyed during cadastral surveys, i.e., when parcelling plots or checking plot boundaries. This work has also undergone quite a revolution in the past twenty years. Jani Jauhiainen, a production manager at the National Land Survey of Finland, says that in 1999, when he joined the NLS, surveying was mainly done with a tacheometer instead of GNSS devices. The results from the tacheometer were recorded on paper and a calculator was used to calculate the coordinates for the boundary markers. Over the years, measuring instruments have changed enormously.

“Surveying has been developed with merit by the National Land Survey of Finland throughout the time I have worked here,” says Jauhiainen.

Nowadays, almost all cadastral measurements are taken using RTK, which gives very quick and accurate information on the position. In practice, the cadastral surveyor uses a GNSS device to check boundary markers during demarcation or to mark new ones when parcelling, for example. When surveying, the device must reach a specific level of precision, after which the coordinates for the site will be measured to the closest centimetre.

The data generated by surveying is the result of interplay between humans and technology. Once the surveyor and cadastral surveyor have completed the surveying activities, the collected data will be extracted and further processed. For our customers, the updated data is visible through a variety of online services, such as the NLS online service, MapSite, the Land Information Service and the open data file download service.

The cycle of data production has accelerated over the centuries, and data is now updated much faster than in the days of maps on paper. For 210 years, the National Land Survey of Finland has been at the forefront of this change, producing data for people and society to use. As equipment and practices evolve, our mission to provide high-quality, up-to-date information remains.