The Botnia-Atlantica project Lystra has been completed. The project resulted in a geological animation that can be viewed online. It can also be watched in nature visitor centres on the High Coast and Kvarken, such as the World Heritage Gateway in Raippaluoto. To create the animation, 2,500 reconstructions were made about ancient shorelines. 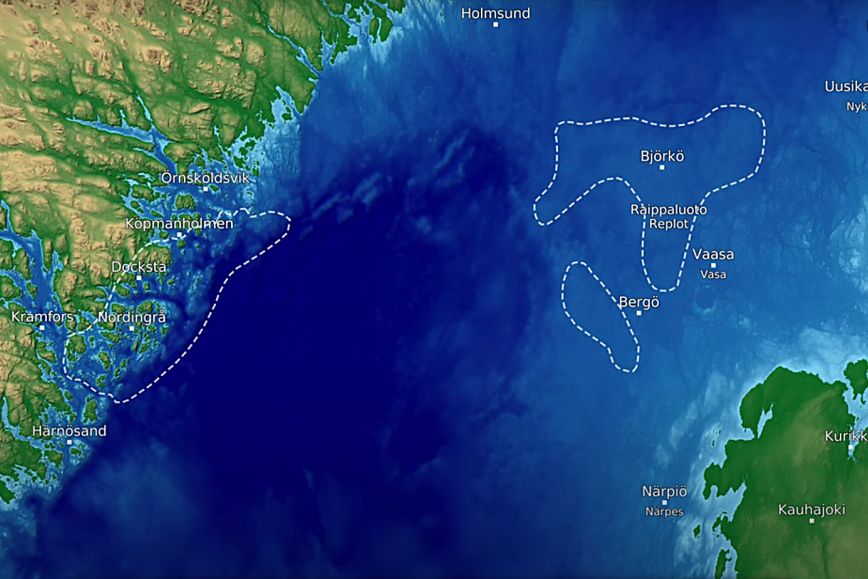 The Kvarken region 7,100 years ago. The area around Vaasa is covered by water.
Photo:
Highcoastkvarken

‘Watching the animation shows the geological uniqueness of the World Heritage Site, and the historical impacts of land uplift on the shoreline are concretised in a novel way,’ says Juha Oksanen, Head of Department at FGI.

The key aim of the Lystra project was to increase people’s awareness of the World Heritage Site and the number of visitors as well as boost the business sector in the area in a sustainable manner. The World Heritage Site covers the Swedish High Coast and the Kvarken Archipelago in Finland.

Researchers also investigated the impacts of a rise in sea level

The Lystra project also outlined other future scenarios. Land continues to rise in the Kvarken and High Coast area, though climate change may also accelerate the rise in sea level in the Baltic Sea.

‘The High Coast and Kvarken have highly different topographies, so even a sea level rise of less than one metre would have a major impact in the low-lying Kvarken area, while in the High Coast, even several metres would hardly change the shoreline,’ says assistant professor Maaria Nordman, joint professor for the National Land Survey of Finland and Aalto University.

If the most pessimistic forecasts came true and the glacier of the Western Antarctic collapsed during the next 300 years, Raippaluoto would be completely covered by water and the situation with Vaasa would not look good either.

It is much more likely that more land will emerge in the next few decades. Globally, the rise in sea level is currently approximately three millimetres a year, while land in the Kvarken area rises eight to nine millimetres a year.