The space junk hurtling through the Earth’s orbit is continuously in danger of hitting satellites important to the functioning of society. Scientists at the Finnish Geospatial Research Institute FGI of the National Land Survey of Finland (NLS) are now developing a method for detecting small but risky space debris. 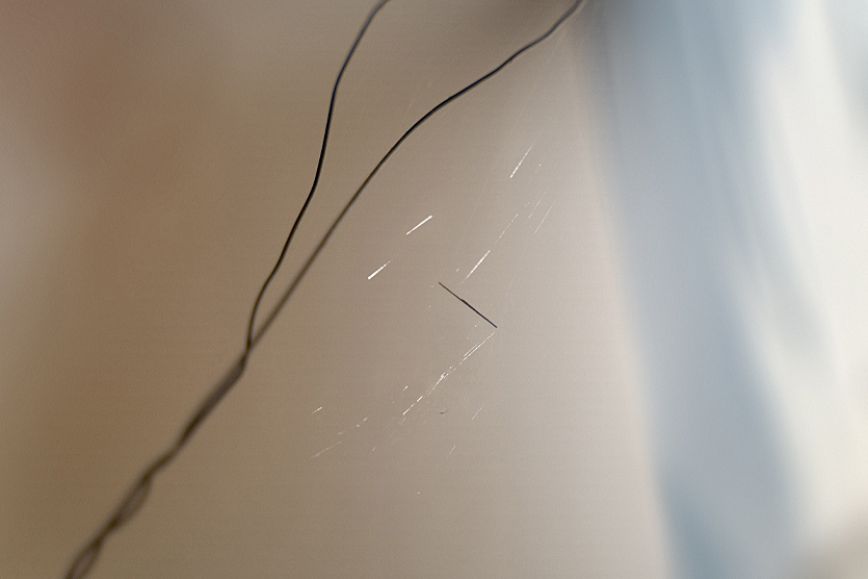 Small pieces of space debris can be attached to spider web for measurement.
Photo:
Maanmittauslaitos

The Earth’s orbit is getting crowded. The satellites orbiting the Earth provide us with geospatial data, enable navigation and produce a continuous stream of data on weather phenomena and security. Regardless, satellites are under a constant threat of running into the space debris hurtling through the orbit. Calculations put the number of objects more than 10 cm in size at more than 34,000, while the number of objects more than 1 mm in size is as high as 333 million. Even tiny 1-mm particles of debris may render a satellite inoperable on impact. The amount of space debris is growing all the time, harbouring the risk of a chain reaction, the resulting space debris of which would prevent the operation of all satellites for good.

If we are to be able to influence space debris collisions, the debris must first be detected.
Currently, the debris smaller than e.g. 0.1 mm can only be detected by in-situ impact detectors. It is precisely for this purpose that the Finnish Geospatial Research Institute of the NLS is currently developing a method.

‘We have strong experience in the modelling of scattering and absorption, and we’ve already applied it to the measurement of land, snow, vegetation, the atmosphere and meteorites, as well as many other targets. We are now applying these skills and knowledge to the measurement of space debris,’ says Research Manager Jouni Peltoniemi of the Finnish Geospatial Research Institute FGI.

Space debris must be measured before something can be done

The measurement of space debris at FGI began in the Orbital Laser Momentum Transfer (Olamot) project, funded by the European Space Agency, which focused on the control of debris pieces with the help of radiation pressure. The work is now being continued in the Coincident Laser Sheet Particle Monitoring in Space COLA project led by the Swiss CSEM, which is developing a laser measurement device for nano satellites to map debris particles and small meteoroids.
‘We are developing a physical model for the scattering of light from space debris particles and small meteoroids. To this end, we’re measuring various objects in the lab similar to pieces of genuine solar panels shot to pieces,’ says Peltoniemi.

While the researchers at FGI have the cutting-edge technology of the research centre in Masala at their disposal, creativity and historical knowledge have also proved useful. The researchers have collected spiders from the nearby forest to help with the studies conducted at the station. Spiders are indeed known to have assisted astronomers in their studies for a long time.

The creative idea for attaching the particles for measurement is beneficial for the scientists and contributes to the progress of the important research.

‘Our studies aim to develop a measuring concept which will allow the development of new tools for the detection of space debris and the prevention of collisions,’ adds Peltoniemi.

The COLA project research will continue until September 2022, but scientists investigating space debris will continue to be in high demand for much longer. The EU has realised the risks posed by space debris and is strongly increasing research, monitoring and services in the EU Space Surveillance and Tracking (EU SST) programmes. While top expertise in Finland in this respect is most actively provided by the Finnish Geospatial Research Institute FGI, the University of Helsinki and the Finnish Meteorological Institute, plenty of expertise in the field can also be found at other Finnish research institutes and business enterprises.  Finland’s skills in astronomical spectroscopy, dynamics, detection, analysis, space weather, planet and meteorite studies, as well as in satellite technology, enable even large-scale participation in international projects. Given that the amount of debris and risks keep growing, there is a real need for research and new solutions.