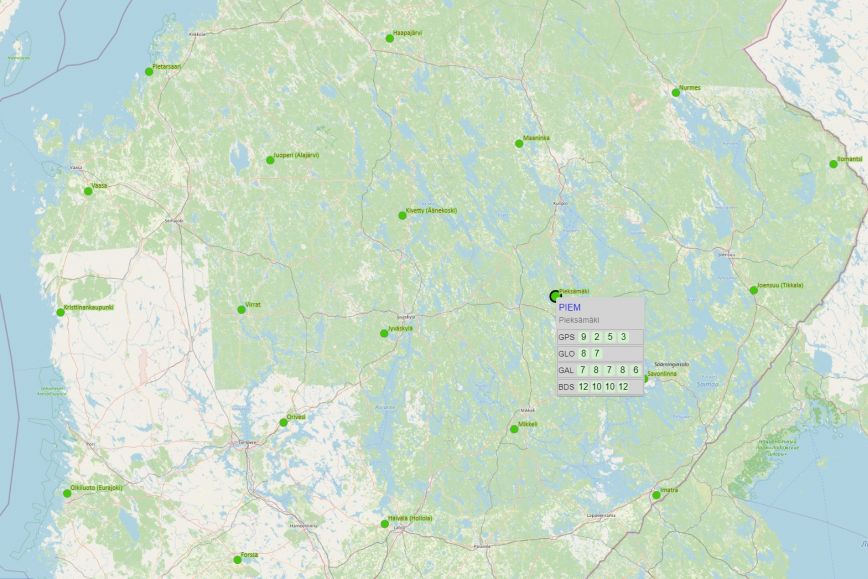 Satellite positioning is used in many fields that are critical for society, such as emergency services and logistics on land, at sea, and in the air. Many smartphone apps also need satellite positioning. Our society has, in practice, become dependent on global navigation satellite systems (GNSS).

GNSS-Finland is a new continuously operating quality monitoring service for satellite signals, which has been developed by the Finnish Geospatial Research Institute (FGI) at the National Land Survey. The service covers the whole country and is open to everyone. The service is based on scientific research commissioned and funded by the Finnish Transport and Communications Agency Traficom, which coordinates the utilisation of radio signals in Finland. The goal is to ensure that the research results and service that is based on them are widely used in society.

The data produced by the service can be integrated to other situational awareness systems, such as those used in air traffic, to give up-to-date information about the operation and reliability of satellite positioning. Other actors can use the GNSS quality data provided by GNSS-Finland, which means that they do not have to invest in their own monitoring systems.

'Finland became one of the first countries in the world which started to publicly share geo-location monitoring data to the general public. Over the past few years, we have seen enormous interests in such a service from Finnish GNSS stakeholders, who would like to see one single platform where anyone could be able to monitor in real time the quality of the perceived GNSS signals. The GNSS-Finland service is exactly addressing this particular need,' says Research Manager Zahidul Bhuiyan, who led the GNSS-Finland project.

For researchers, GNSS-Finland is an excellent platform. Further development would make it possible to monitor GNSS time or to compare positioning precision when using various combinations of systems and signals.

In future, it could be possible to use interfaces to import data provided by other actors into the application. A good example of this is the Finnish Meteorological Institute's ionosphere data, which can be used to show the relationship between the ionosphere and satellite positioning. It is possible to integrate additional features developed by researchers into GNSS-Finland.

In addition to authorities and researchers, anyone can use the service. You can use it to check the availability of GNSS signals or the performance of satellite positioning in your area.

'Satellite positioning can be weakened or prevented by various kinds of radio interference. Sometimes faulty electrical equipment can unintentionally send a signal in the frequency band used by satellite positioning signals and cause malfunctions. It is our responsibility to identify, investigate and eliminate radio interference in all parts of the country,' says Deputy Director-General Kati Heikkinen from Traficom.

'The GNSS-Finland service is based on GNSS-stations in the national FinnRef network, which can be used to monitor all satellite positioning systems and the quality of signals of every frequency,' says Department Director Sanna Kaasalainen from the National Land Survey.

GNSS-Finland transmits alerts in accordance with predefined criteria to Traficom. These alerts can be used to gain up-to-date information about, for example, interruptions in signal transmission.

GNSS satellites not only produce spatial data but also precise timing data necessary for the maintenance of many systems that are critical for society to function. The GNSS-Finland service enables scientific research on the resilience of timing data.