Research professors Antero Kukko and Harri Kaartinen are the FGI’s dynamic duo of collecting point cloud data by laser scanning. They have been laser scanning partners conducting research together for almost two decades. Many great things have been achieved: they have traveled the world alone and together, testing their laser scanning equipment on various locations, produced an impressive amount of novel scientific knowledge and published heaps of internationally acclaimed, high-level scientific articles. Now, this duo is among the most wanted specialists in the world, regarding hyperspectral laser scanning research. 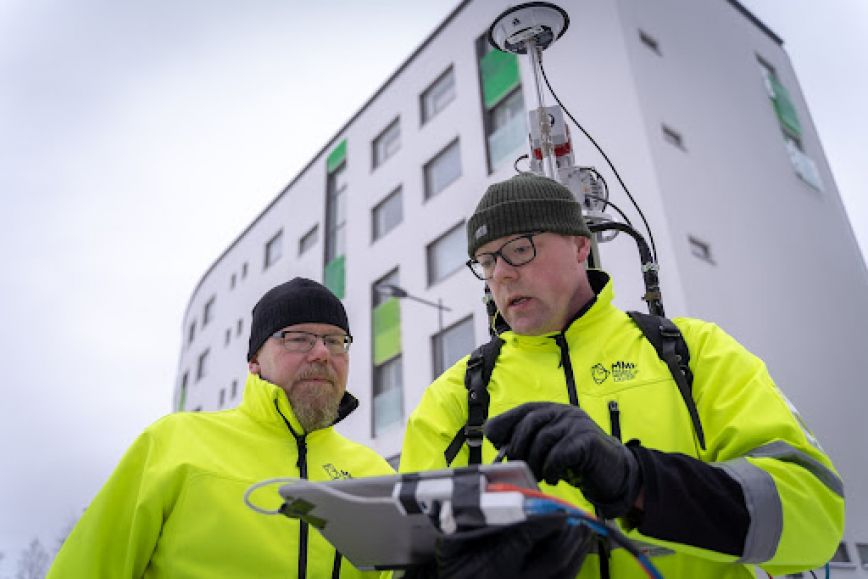 The workshop of the research professors is located behind locked doors in the FGI premises in Masala in Finland, and a quick peek through the door brings first to mind the workshop of Gyro Gearloose. Antero Kukko is known internationally for being the forward-looking inventor of the laser scanning back pack - Equipment designed for collecting point cloud datasets from anywhere, where a person carrying a backpack can go. Antero has been “backpacking” with his equipment even inside volcanic craters, although most commonly he can be found laser scanning forests. He has installed scanners also in helicopters, ATV’s cars and boats - almost any mobile platform one can think of. Harri Kaartinen is one of the leading Finnish point cloud scientists, he has recently completed a six-year COMBAT/Pointcloud project, funded by the Finnish Academy Strategic Research Council. The project has considerably promoted and progressed the use of laser scanning and point cloud data, for managing the Finnish national assets and for different functions of the society.

Antero tells, that he uses mainly commercial laser scanning sensors, it is not necessary to build the equipment from the scratch, although his Autonomous Mapping and Driving research group has also built their own scanners. His speciality is to test combining and using the sensors in ways and destinations previously unexplored. Their research group at the FGI is specialized in analyzing the unique, novel data that the duo collects: many a young researcher has started their career by analyzing the data from Antero and Harri. Several bachelor’s and master’s theses, as well as doctoral dissertations have been based on their data both from the FGI and the partnering Universities. Antero’s research group is active in developing algorithms that recognize physical objects or phenomena from point cloud data.

During their latest field work tour in Europe, the research professors collected data for two projects.
The tour started by heading towards Southern Europe, where the plan is to make multispectral laser scanning measurements of coniferous trees under European Union-funded Chist-era project, where the collaborators include the University of Vigo in Spain, University of Porto in Portugal, Technical university of Vienna and the University of Natural Resources and Applied Life Sciences (BOKU) in Austria as well as the Czech University of Life Sciences. This work was prepared during the autumn 2021 and next spring 2022 the multispectral laser scanning system will be installed in a helicopter, from where it scans the forest with laser pulses on three different wavelengths. The multispectral technique is what makes this research novel, as well as the shape of the scanning beam. The system sends laser pulses in a cone shaped beam, a few degrees forwards and backwards. Such a beam can measure the base layer of the forest better, as the pulses reach under the canopy of the main tree species. The system can measure up to fifteen million points in one second, and produces a detailed 3D model of the forest.

The second project, “Estimating Forest Resources and Quality-related Attributes Using Automated Methods and Technologies” funded by Tandem Forest Values instrument, is building collaboration and new expertise together with the Swedish SLU & the forestry enterprise Stora Enso. The laser scanners were brought to Sweden in October 2021, to make in-depth analysis of the quality of pine tree trunks from a commercial forest. Pre-chosen test plots were laser scanned first from a helicopter and then with a land-based scanner as well as hand-held scanner and the dual channel laser scanning backpack. The data is used for developing automatic methods for calculating external quality indicators from single trees. Test plots were chosen from commercial forestry areas, the plots are cut down after the data collection is finished, the forestry machine collects data on the quality and position of the trees, the logs are x-rayed at the saw mill and for example the amount of branches will be analyzed carefully. The research aims to find out if multispectral laser scanning data can be used for observing the indicators predicting the quality and value of a tree. Such factors are for example the species, volume and height of the trunk, the size and structure of the branches or internal damage.

When the forest data is analyzed, researchers develop the algorithms that measure and classify the trees and the branches, for example the shape of the trees, their growth and the needle color, density and moisture content. Detailed laser scanning data may reveal problems in the health of the forest, even before a human eye can see that the trees are suffering. The scientists aim to measure for example the changes caused by the forest pest bark beetle, which is common in Southern Europe and spreading fast to Finland as well. When the pest problems are observed quickly, land owners have better chances to manage and control the damages. The researchers are also testing automatic detection of the invasive tree species Eucalyptus, as well as measuring the impact of the forest species structure to the risk of forest fires, the fire spreading mechanisms and the potential impact of the Eucalyptus bark to the fire load.

The common denominator is climate change and the potential impacts it may inflict on our forests. Both the risk of pest damages and forest fires may increase as a result of increasing temperatures and periods of drought. The new technology created by the FGI research professors is not capable of stopping climate change, but it can help readjusting and preparing for the environmental changes. In addition, detailed forest data helps us to assess the ability of our forests to capture and store carbon, and is therefore important for assessing the upcoming changes.