An international team of experts participated in a snow measurement campaign in Sodankylä in March and April. The conducted measurements improve the monitoring of Earth’s snow cover and climate from space. Recently published video about the campaign shows how snow is studied in Arctic conditions. 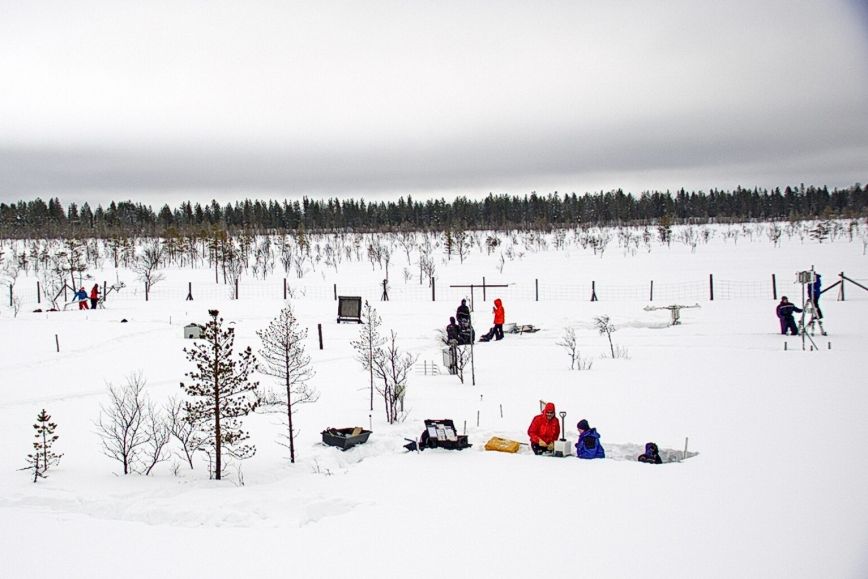 The SnowAPP campaign brought together a team of around 20 experts in a month-long research project at the Finnish Meteorological Institute’s Arctic Space Centre in Sodankylä. Research manager Jouni Peltoniemi from the National Land Survey of Finland participated in the snow measurement campaign.The international research team used a large variety of different methods to study snow.

Snow research is important for the adaptation to the changing climate

Global warming is changing the amount of snow on the Earth. It also has large impacts on the ecosystems, fresh water availability, climate system and consequently on all human activities. The impacts are experienced in both seasonally snow-covered regions and snow-free regions.

“Research data on snow is more and more crucial for freshwater management and adaptation to new climate conditions. The data is also needed when assessing the risks related to snow and the melting of snow, such as avalanches, floods, and land instability consequent to the thaw of permafrost,” notes Pirazzini.

In Sodankylä, the team measured snow properties, such as the electromagnetic signals reflected and emitted by the snow at different wavelengths. The observations were conducted using, for instance, spectro-albedometers, radiometers and radars. The measuring devices were deployed on a flat, snow covered wetland area, where simultaneous measurements were performed, for example, on the structure, humidity and impurities of snow with various research equipment.

Equipment of FGI was used in the research.

“We have developed FIGIFIGO, a unique field goniospectrometer which accurately measures reflections from snow in different directions. The measurement campaign was a success. We obtained large amounts of data for further research”, Peltoniemi says.

The observations collected during the SnowAPP campaign will be used to develop a new model of the interaction of snow and electromagnetic radiation.

“The results will be used to improve the simulation of snow surface albedo in numerical weather prediction and climate models,” says Petri Räisänen, Senior research scientist at the Finnish Meteorological Institute.

Video about the campaign

The campaign is funded by the Academy of Finland project SnowAPP (“Modelling of the Snow microphysical-radiative interaction and its APPlications”) and by the H2020 EU project INTAROS (“Integrated Arctic Observation System”). Senior scientist Roberta Pirazzini was the principal investigator of the SnowAPP field campaign and of the FMI contribution to the INTAROS project, while senior scientist Petri Räisänen is the principal investigator of the SnowAPP project.