Even more detailed data on the condition of roads, power lines, rivers and forest resources can be obtained in Finland – FGI conquers new territories in laser scanning with universities

Assessments of the condition of the Finnish road network over a distance of 50,000 km, the condition of power lines and the need for forest management at an accuracy of individual trees. A recent study enables all these and much more. 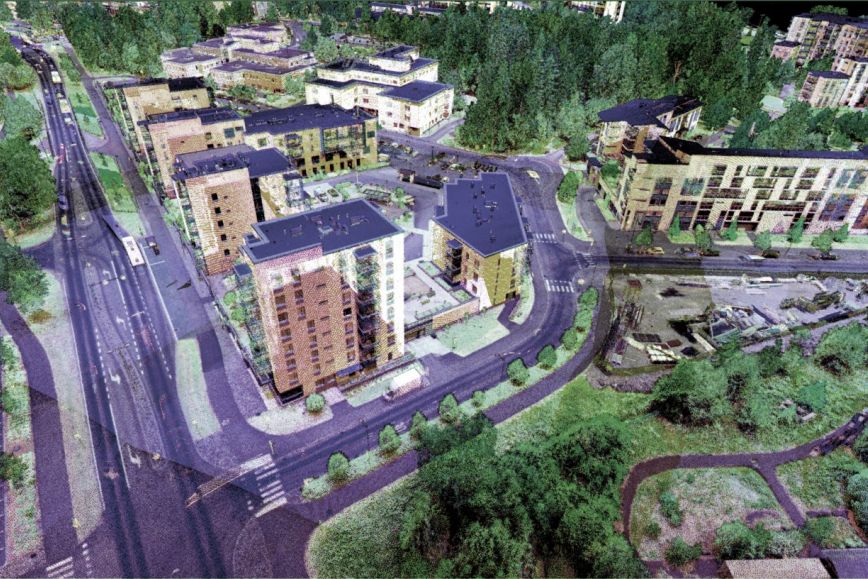 In the six-year project objects that have never been identified in such detail in Finland were modelled for the first time. Laser scanning was applied to the 3D modelling of forests, towns and routes such as roads, power lines and rivers.
Photo:
Antero Kukko / NLS

In the COMBAT/Pointcloud research project funded by the Academy of Finland’s Strategic Research Council, objects were laser-scanned and turned into accurate 3D models. The models facilitate making decisions on road, power line and forest management. The project involved researchers from the Finnish Geospatial Research Institute (FGI) of the National Land Survey of Finland (NLS), Aalto University, Turku University and Oulu University. In the six-year project, objects that have never been identified in such detail in Finland were modelled for the first time. Laser scanning was applied to the 3D modelling of forests, towns and routes such as roads, power lines and rivers.

The detailed data collected through laser scanning are valuable for society and companies in making decisions on road, power line or forest management.
“In practice, the detailed overview of our environment, generated through laser scanning, helps in maintaining forests, properties and routes – a significant part of our national assets,” says Harri Kaartinen, research professor at FGI.
Models were also generated using the multi-channel laser scanning system, which was developed during the project. It represents the latest technology in the field and produces even more detailed data about objects. For the 3D modelling of the environment, researchers from FGI and universities produced algorithms that identified tree trunks, land use in towns and power line cables.

“As a result of the breakthroughs made during the project, tree species and such factors as road surfaces can be identified in much more detail than before,” Kaartinen says.

Previously, 3D modelling was carried out using detailed aerial photos. Currently, NLS produces 3D point clouds not only using aerial photos, but also using the laser scanning method, in which objects are illuminated by laser beams. The national laser scanning programme updates all Finland’s point clouds every six years with the exception of the northernmost parts of Lapland.

A laser scanner in a backpack, ATV, helicopter and car – this is how Finland is scanned in 3D

This time, laser scanning was targeted at objects that have never been identified in such detail in Finland. As a result, it was impossible to buy any off-the-shelf scanner. Researchers built the multi-channel laser scanners they needed to scan the environment from an ATV, helicopter and car, and by walking around while wearing a backpack scanner.

Condition estimates for routes were tested using a car equipped with a laser scanner. The trial was a success, and the collection of 3D data on the entire road and main street network in Finland is about to start, covering roughly 50,000 km. Detailed mapping and condition estimates for roads and their surroundings can be carried out based on the data. The data are also suitable for specifying city models.

“During the project, we developed route mapping technologies further, as a result of which they can be applied in practice to the inventory of road conditions and the optimisation of maintenance,” says Hannu Hyyppä, professor at Aalto University’s Research Institute of Measuring and Modeling for the Built Environment.

Regarding forests, the data produced in the project will be used in the National Forest Inventory. Using the algorithm developed by FGI’s researchers, the length, diameter, stem curve and volume of individual trees can be measured automatically and accurately. These data can be used by the largest Finnish forest industry companies.
Laser scanning is also applicable to preparation for climate change.
“The project significantly advanced the development of the tools required for fire safety and flood control,” says Petteri Alho, professor of hydrogeography and remote sensing at the University of Turku.

The research results are also applicable to the reliability of electricity supply. To identify the condition of power lines, the researchers developed an algorithm that made power lines stand out from their surroundings. Aerial laser scanning was tested during the project with good results, which will make condition estimates easier in the future.

The authorities and companies use the data produced in the study of rivers and channels by accurately modelling the impact of climate change, regulations or embankments on the durability of riverbanks, erosion and flooding. This technology also serves to monitor minor movements in water engineering structures such as bridges and dams that could not be identified as reliably using conventional measuring methods.

3D modelling is growing fast – with Finland leading the way

“Finland is among the world’s leading countries in laser scanning. This project has helped us accelerate the spread of expertise in Finland and provide companies with business opportunities, driven by the rapid increase in the point cloud technology. The first-place ranking of the NLS in the Academy of Finland’s recent statistics for research organisations is also a good indication of the quality of research,” Kaartinen says.

Sharing information is part of the principle of open science, according to which research and its results must be openly available and usable.

As a result of open data and encouraging research results, 3D modelling is in an excellent position to expand to yet new territories. The Pointcloud project is already being continued by several new research projects such as the Hydro-RDI-Network for sustainable river environments and the UNITE flagship project for the forest sector.