Research is being conducted at the South Pole to improve the accuracy of satellite observations. The research also aims to produce more accurate estimates of the future of the Antarctic ice sheet. The National Land Survey of Finland (NLS) is also a member of the FINNARP 2022 expedition. 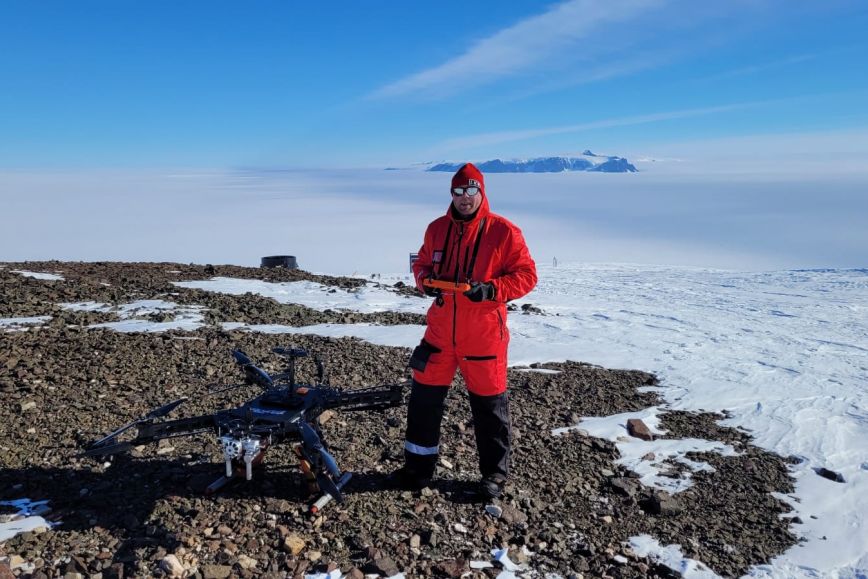 ‘My job is to collect accurate data about surface roughness over areas of about 0.5–1 km2 at a time by laser-scanning the surface of snow, ice and sea ice in different places over a ten-kilometre radius from the Aboa research station using a large hybrid drone,’ says Antero Kukko, research professor at FGI.

The team includes snow, ice and remote sensing researchers and geologists from the NLS, the Finnish Meteorological Institute (FMI) and the Finnish Museum of Natural History. Half of the ten-person team are members responsible for the research station’s technical systems, food and medical supply.

The Finnish Geospatial Research Institute (FGI) of the NLS is represented by research professor Antero Kukko who is a member of LAS3R (determining the surface roughness of snow and sea ice in Antarctica using laser scanning technologies to develop satellite-based albedo and altimetry observations), a joint project of the NLS and FMI funded by the Academy of Finland.

‘The project studies the surface roughness of snow and sea ice and aims to build a more accurate reflectivity model to interpret satellite observations,’ he says.

The Antarctic ice sheet and sea ice are significant parts of the global climate system. Monitoring their state using satellite observations calls for a broad understanding of various factors that affect these observations, but until now the impact of the surface roughness of snow and ice on satellite measurements has not been known to a significant extent.

‘Antarctica is a massive area, 41 times the surface area of Finland, 98 per cent of which is covered by snow and ice. This is why it is so significant for our climate. The Antarctic climate is very dry, and the structure and reflective properties of snow differ from those of our snow,’ Kukko says.

Fieldwork is an integral part of research in Antarctica.
‘My job is to operate a large hybrid drone to collect accurate data about surface roughness over areas of about 0.5–1 km2 at a time by laser-scanning the surface of snow, ice and sea ice in different places over a ten-kilometre radius from the Aboa research station. For sea ice flights, we will travel to the coast some 150 kilometres from Aboa to carry out line-like flights of several kilometres to detect long wavelengths in the structure of sea ice,’ Kukko says.

The measuring instruments used are developed by FGI. FGI is the world’s leading researcher of mobile laser scanning.

During the research period, regular repeated measurements will be conducted in a few selected locations to monitor any changes in the surface roughness of snow and the impact of solar irradiance on the surface structure and reflectivity of snow during summer.

The measurements will be synchronised with satellite overpasses.

‘To be aligned with satellite routes, we will use orbit estimates and select the most appropriate ones, taking the distance and prevailing weather conditions into account. We will access these areas using snowmobiles.’

FINNARP, the Finnish Antarctic Research Program operating under FMI, organises annual expeditions to Aboa and supports fieldwork carried out by projects receiving funding from the Academy of Finland in Antarctica. Research focuses mainly on Queen Maud Land and the surroundings of the Aboa research station, and also extends to more distant areas.

Further information about the NLS’s research activities and the LAS3R project: